Each and every week insideF2.com will bring you our Monday feature The Debrief.

The latest Formula 2 weekend saw a new track to the calendar, but the same old entertainment. For the first time, Formula 2 travelled to the Tuscan region of Italy and the superb Mugello for Round 9.

The event marked the three-quarter stage of the 2020 Formula 2 season and it was more of the same. We had a shock winner, Safety Car madness, teammate clashes and another change in championship lead – this time to someone who hadn’t led before…

But before all that let’s take you all the way back to Friday and the 45-minute practice session.

Some of the drivers on the grid may never have been to Mugello before, let alone race there, so practice was even more important than usual.

With experience on the Mugello circuit vital, it was the man with the least Formula 2 experience who set the early pace.

Juri Vips, still standing in for the injured Sean Gelael, topped the session, showing just what he’s capable of.

Home hero Luca Ghiotto was second, and for the first time this season he had some fans to support him, with a limited number allowed in to spectate.

Felipe Drugovich was third, ahead of title contender Yuki Tsunoda and Dan Ticktum. 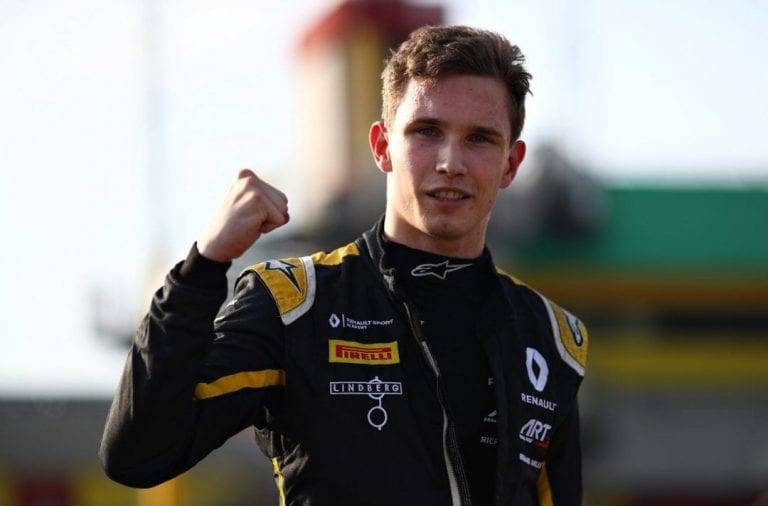 With the acclimatisation done, the field returned later on Friday to set the grid for Saturday’s Sprint Race.

The 22 drivers were pushing their cars to the limit, with some going over it. In the early stages of qualifying, both Mick Schumacher and Ghiotto took to the gravel on the unforgiving circuit.

Marcus Armstrong set a good pace, provisionally going fastest before he was edged out by ART teammate Christian Lundgaard. Dan Ticktum split them with a strong lap, bouncing back from last week’s Monza disqualification.

The three main title protagonists were struggling midway through the session, with none of Callum Ilott, Robert Shwartzman or Schumacher in the top 10.

Ilott changed that with his final run, moving up to P3. Few drivers improved on their final runs, leaving Lundgaard to take his first pole in Formula 2 and four championship points.

Ticktum was second ahead of Ilott, Armstrong and Drugovich. Jehan Daruvala performed well in sixth, whilst Vips and Ghiotto shared the fourth row.

Shwartzman improved to ninth, but PREMA teammate Schumacher ended down in 15th.

Lundgaard started well on race day, but championship leader Ilott slipped back down the field to P7. Ghiotto did the opposite of Ilott, going from seventh to third.

The Italian then made a further move on Ticktum for P2, before Shwartzman suffered a huge blow in his title hopes.

The Russian was struggling for a few laps, before pulling over to the side of the road and retiring.

With less than ten laps to go, the Safety Car was called out as marshals recovered Giuliano Alesi’s stricken HWA as he came to a halt on track.

The bunched up field set us up for a thrilling remainder to the race. There was contact at the restart, Ticktum and Tsunoda came together before Zhou was the meat in a Schumacher and Jack Aitken sandwich. Aitken and Zhou had to retire, with Ticktum and Tsunoda falling down the field.

Schumacher got away unscathed, but as the Safety Car was called back out, Ilott had to pit for a new nose, ruining his points scoring chances.

Lundgaard still led as the Safety Car came in once again, but not for long as Nikita Mazepin went from third to first. Ghiotto then passed Lundgaard, and the Dane fell even further, losing out to Louis Deletraz, Drugovich and Schumacher.

Mazepin held on for race win ahead of Ghiotto, making it a Hitech 1-2. Deletraz scored his first podium since Silverstone. Drugovich returned to the points after four races out, ahead of Schumacher, who took the lead in the Formula 2 standings for the first time in his career. 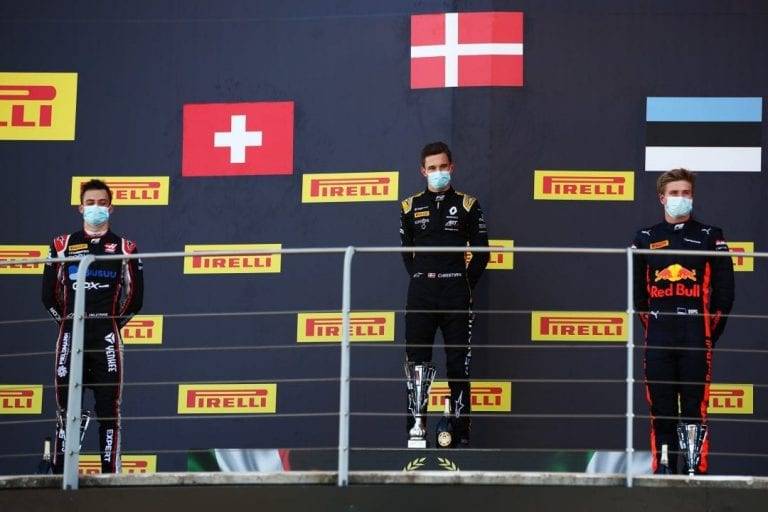 As Sunday came around, Mugello decided it wanted to give us another treat, as if Formula 2 hasn’t done enough of that this year!

Lundgaard made up for his later struggles on Saturday, moving up to first at the start. Deletraz continued his excellent weekend moving up to third.

Soon, Deletraz and Vips got ahead of Markelov, who began to struggle.

Markelov hasn’t had the pace all year and it showed on Sunday morning, as he was then overtaken by Schumacher, Mazepin and Ghiotto in quick succession.

It was looking to be another good day for Hitech, but all their hard work was for nothing on Lap 15. Ghiotto went for an overtake around the outside at Turn 1, but the pair collided.

Ghiotto was pitched into the air, coming to rest in the gravel trap, whilst Mazepin had to pit in case of damage, ending their chances of points.

Meanwhile, the UNI-Virtuosi pair of Zhou and Ilott were picking their way through the field. Zhou was the biggest overtaker of the day, picking up a massive 15 places from his lowly starting position.

Lundgaard dominated the race, securing fastest lap to take 17 points, bringing himself back into the mix for the title. Deletraz took his second podium of the weekend, with Vips making his first appearance on the Formula 2 podium in third.

Schumacher held on for fourth ahead of Zhou, with Ilott a few seconds further back in sixth. Daruvala scored more points in seventh, whilst Marino Sato squeaked into eighth, scoring his first point of the year.

Shwartzman could only manage ninth and therefore finished the weekend without scoring, a frustrating one for him.

Whilst he failed to add to his eight podiums for the season, Schumacher was the big winner this weekend, jumping into the lead of the Formula 2 drivers’ standings for the first time in his career.

Ilott managed four points on Sunday, limiting the damage and now sits eight points behind Schumacher on 153. You might expect Shwartzman to be third, but instead Lundgaard is now the nearest challenger to Schumacher and Ilott.

The Dane is five points ahead of Shwartzman. Saturday’s winner Mazepin kept his faint title hopes alive and moves ahead of Tsunoda into fifth place. With only 12 points in five races, Tsunoda will be under pressure to perform at the final three rounds.

The Japanese driver has been linked with a move to F1 with Alpha Tauri, but he needs a top four finish to earn the Super Licence points.

Deletraz’s stellar weekend moves him to 122 points, just one behind Tsunoda. Mazepin, Tsunoda and Deletraz have probably left themselves too much to do to take the title, but in Formula 2, it’s always open.

As far as the constructors’ standings are concerned, PREMA and UNI-Virtuosi have been in a class of their own this season, but a few shaky weekends has seen Hitech close in. PREMA are still top, with UNI-Virtuosi 40 points back. Hitech are still 45 points away from the Norfolk-based team, but they closed the gap by 33 this weekend…

The only change in the constructors’ standings was for sixth place, as Charouz jumped MP Motorsport.

Just three rounds to go then! We’ve got a week off before Sochi and then plenty of time to consider what’s going to happen at the double header in Bahrain. It’s been a crazy championship so far, and we can’t wait to see what’s just around the corner!

As always we saw lots of drama through the weekend.

However, most overtaking was down into Turn 1 following the DRS drag race across the main straight.

We had plenty of choose from but this weeks #ITGOTSENT award goes to Louis Deletraz and his pass of Artem Markelov for P2 in the Sprint Race.

Around the outside and up to P2! ?@LouisDeletraz takes to the podium twice in one weekend! ??#TuscanGP ?? #F2 pic.twitter.com/aGZcyPjjzY

So each week we will nominate four of the name’s that stood out from all of the above action to crown our Formula 2 Driver of the week.

This week the InsideF2 community have now completed their voting and it was neck and neck right until the finish line. The final result is a win for Louis Deletraz 🙌🏻surely the highlight of his week 😆

NEXT EVENT: ROUND 10 – Sochi, Russia. (Click here to see the weekends schedule)