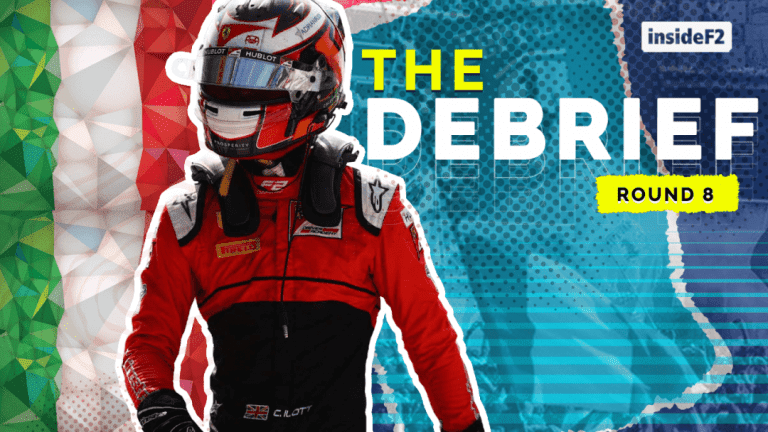 Can you believe we are now two-thirds through the 2020 Formula 2 season? It seems only yesterday the paddock rocked up to Austria in July, but this fast-paced championship is getting to the business end.

The latest location to host Formula 2 was the world famous Monza. The speedy circuit always produces a good Formula 2 weekend and we had it again. We had a new winner for the season, a change in championship lead and a whole lot else.

But before all that, the weekend started as it always does, with practice.

If points were given for practice and not for the races, Yuki Tsunoda would be the runaway leader. The Japanese driver topped the timesheets in practice for the fourth time this season.

There was also good pace for Christian Lundgaard, Nikita Mazepin and Dan Ticktum. Championship contenders Callum Ilott and Robert Shwartzman were lower down, in P6 and P12 respectively. 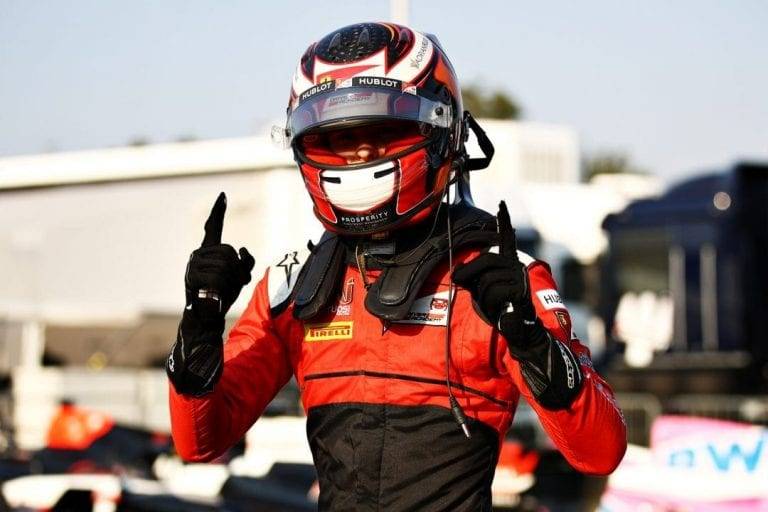 Later on Friday saw the half hour qualifying session. After madness earlier in the day with Formula 3, the Formula 2 drivers were pretty well behaved!

Mick Schumacher looked good early in the session, setting the early pace. However, when he couldn’t improve, he was trumped by several drivers.

The quickest of those was Ilott, who shot to the top of the leaderboard ahead of Tsunoda and Luca Ghiotto.

Trying to reclaim pole, Schumacher pushed a bit too hard and spun at Ascari, hitting the barriers. The German was unharmed, but his PREMA was ruined and the session ended early, giving Ilott the four bonus points for pole.

Even more of a benefit for Ilott was the misfortune of his title rival, as Shwartzman qualified down in 16th. 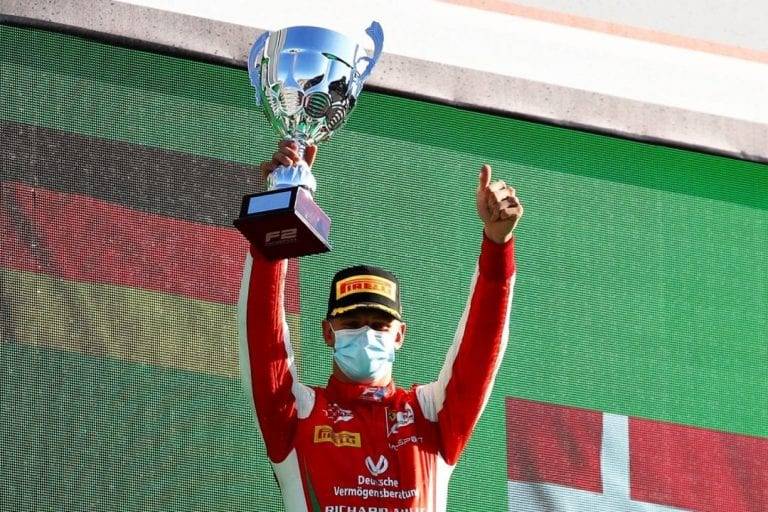 As Saturday came around so did the first of the two Formula 2 races.

Ilott got a good start from pole and held the lead, but it was Schumacher who got away best. The PREMA star moved from seventh to second by Turn 1, and even pressured Ilott on the first lap.

It was comfortable opening for Ilott, but that changed as he came into the pits. Following great work from his UNI-Virtuosi mechanics, Ilott stalled when leaving the pit box. His team got him going again but he had lost valuable time.

This allowed Schumacher to take the net race lead, and when the final of the medium runners pitted, he claimed P1.

Behind him, Ilott and teammate Zhou were charging through the field. Zhou qualified down in 17th, so both had points to prove.

The pair scythed through the field, passing car after car on their way into the points.

On the final lap Ghiotto passed Lundgaard for P2, but Schumacher was a step too far. The son of Michael took his first win of the season and his maiden Feature Race victory.

Tsunoda ended a quiet race P4, ahead of Zhou, who picked up an amazing 12 positions. Ilott recovered to sixth, ahead of Ticktum and Louis Deletraz, who claimed reverse grid pole.

Shwartzman just missed out on Sunday pole in ninth, with Jehan Daruvala claiming a solitary point for P10. 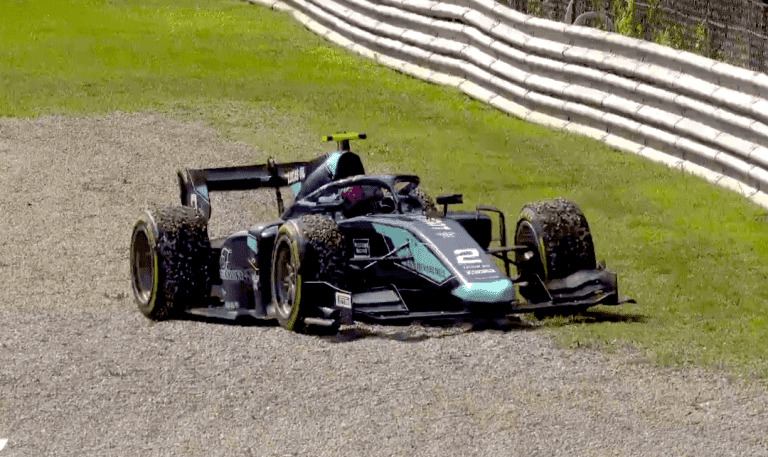 The weekend’s drama was still far from over however. Sunday’s Sprint Race got underway with Ticktum taking the lead from Deletraz into Turn 1.

Schumacher soon passed Lundgaard before making a mistake under pressure from Zhou, losing out on positions that would prove to be vital.

It wasn’t a good day for Formula 2’s leading Asian drivers. Firstly, Tsunoda slowed and dropped to the back of the field with a problem. Just a few laps later, Zhou did exactly the same. These issues dented the pair’s title aspirations, with Zhou seemingly now completely out of contention.

Ilott stalked Deletraz and at the race’s midway point he made the move, utilising DRS to take second.

The Swiss driver continued to lose positions, falling behind Lundgaard and then Schumacher.

Ticktum dominated the race with a masterclass of a performance, but the drama wasn’t over. He pulled his DAMS to the side of the track after crossing the line, fearing he wouldn’t have enough fuel to provide a sample.

He returned to the pits, celebrated P1 on the podium whilst an investigation took place. And then we received the news he had been disqualified. There wasn’t enough fuel in his tank for Race Control to take a sample, meaning Ilott moved up into P1 for his third victory of the season.

Lundgaard took second and Schumacher scored yet another podium finish in third. Deletraz was fourth ahead of Shwartzman and Daruvala. Aitken claimed seventh, with Mazepin recovering from the back of the grid to grab P8.

The lead of those is Sunday winner Ilott, who moves on to 149 points. For the first time this season, Schumacher is the lead PREMA on 143, with Shwartzman on 140.

Tsunoda’s title hopes took a blow on Sunday, he’s 26 points behind Ilott with Lundgaard a further seven back.

Mazepin and Zhou’s faint hopes of glory have faded, with the pair on 102 points each.

As far as the constructors’ standings go, PREMA extended their lead over UNI-Virtuosi. The Italian marque claimed the Formula 3 title this weekend, but the squad from Norfolk are still in the fight.

Lundgaard and ART’s return to form sees them jump above Carlin in the only switch in the Constructors’ Championship.

We’re nearing the end of what has been quite an incredible title battle. We’ve got three favourites with a few outsiders. It’s Mugello next, an unknown quantity for a lot of these teams and drivers, so we should be in for more drama then!

The Temple of Speed saw many dicey overtakes across the weekend, however none of them could hold a candle to Mick Schumacher’s on Saturday.

The man was on a mission in the Feature Race, after having a blinding start and overtaking Yuki Tsunoda and Christian Lundgaard around the outside of Turn 1.
Second by Turn 1 after starting seventh, not a bad day in the office ??

So each week we will nominate four of the name’s that stood out from all of the above action to crown our #F2Driver of the week.

This week the InsideF2 community has voted for Mick Schumacher. 🙌🏻

Who was your Driver of the week? #RaodtoF1 #ItalianGP #F2 #FIAF2 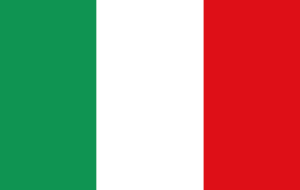 NEXT EVENT: ROUND 9 – Mugello, Italy. (Click here to see the weekends schedule)