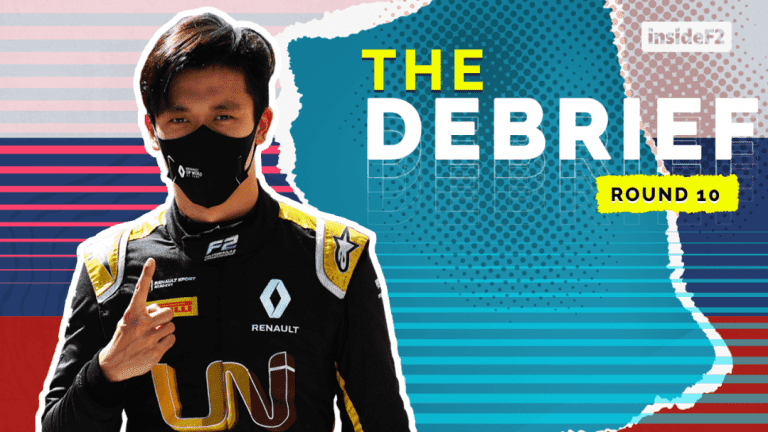 Each and every week insideF2.com will bring you our Monday feature The Debrief.

Two rounds, four races, that’s all that’s left of the 2020 Formula 2 season as the teams leave Russia upon conclusion of the event in Russia.

And it was yet another intriguing weekend at the Sochi circuit, built around the 2014 Winter Olympic park. We saw a rare front-row lockout, overtakes, crashes and a brand new winner, but before all of that action, let’s cast back to Friday, the first day of running in Russia.

45 minutes is all the drivers get for practice in Formula 2, and you may have noticed a few differences on the grid. Absent was Nobuharu Matsushita, leaving F2 in search of a new challenge. In his place, Giuliano Alesi, who transferred from HWA Racelab to MP Motorsport.

Filling in for Alesi was debutant Jake Hughes, making his first appearance in Formula 2 after a decent Formula 3 season.

It was a man with lots of Formula 2 experience who recorded the fastest time in the session, with Luca Ghiotto setting the pace, despite a late spin.

Yuki Tsunoda was looking to get his title charge back underway and he set the second quickest time, ahead of Carlin teammate Jehan Daruvala.

Fresh from his victory in Mugello, Christian Lundgaard was fourth, ahead of title contender Callum Ilott. The Brit’s main rival for the championship, Mick Schumacher, was down in ninth.

Later on that day we saw the tenth qualifying session of the year, with four points available for pole position.

And it was a continuation of form for Carlin, as Tsunoda pipped Daruvala for pole position. The Indian driver made the better start to the session, but Tsunoda edged ahead by less than a hundredth of a second.

The man in form, Schumacher, claimed third with a strong lap ahead of rival Ilott, with Ghiotto and Lundgaard sharing the third row. After a couple of lean weekends, Robert Shwartzman was down in seventh and had a mountain to climb to make up points on those around him in the standings. 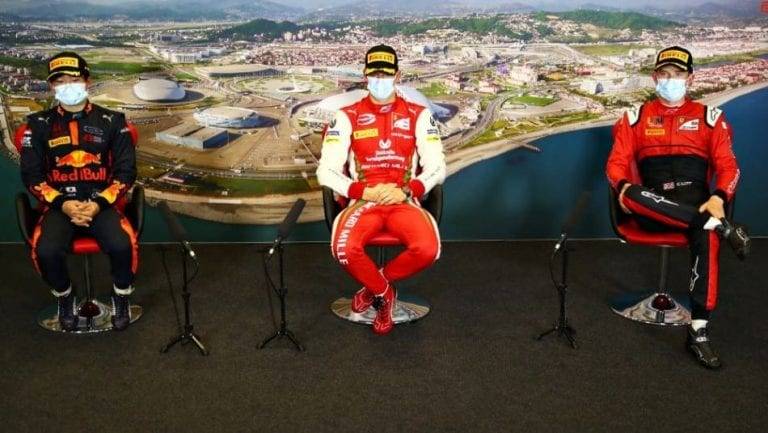 Due to Formula 3 being absent this week, the Feature Race got underway. Tsunoda made the better start, although Daruvala dropped back behind Schumacher.

As the first to pit, Daruvala lost out to Ilott behind when the other leaders made their stops, leaving the medium runners in the lead.

Jack Aitken, Guanyu Zhou and Nikita Mazepin battled for supremacy, but it was soon clear that the alternate strategy was not the one to be on, and they dropped back down as they stopped.

Eyeing up another win, Schumacher closed in on Tsunoda, and he was followed through by Ilott, who tried to close the gap to the German.

It looked like we would be in for a good fight, but soon after Ilott was struggling for grip and fell into the clutches of Tsunoda once again, being relegated back to third.

After a quiet race, suddenly all eyes were on Ghiotto. He was closing in on Ilott, and it required some terrific defense from Ilott to keep the Italian behind.

The Hitech got the better exit off the final corner, but the finish line came too quickly for him, and Ilott held on for third.

Back in fifth was Daruvala, with Aitken the best of the alternate strategy runners in sixth. Mazepin was seventh after a battle with Zhou, who claimed reverse grid pole in P8.

Marcus Armstrong continued his recovery from a poor middle of the season in ninth and Dan Ticktum claimed the final point in tenth. 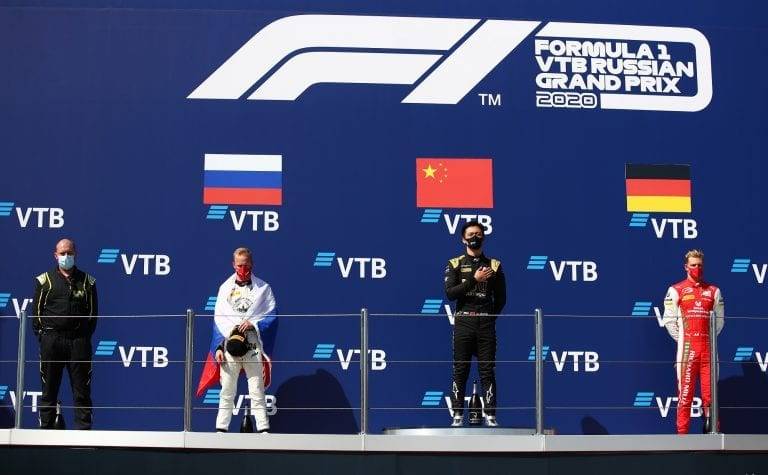 The Sprint Race on Sunday got underway and it was polesitter Zhou who got away best, holding off Aitken to keep the lead into Turn 2.

Schumacher yet again got a good start – his trademark in Formula 2 this season – jumping from P8 to P4 on Lap 1.

Having lost out at the start, Mazepin recovered for second, passing Aitken. The Campos driver was soon struggling for pace, losing out to Schumacher as well.

Mazepin was closing in on Zhou, looking for a home win, but his progress was halted as the red flags were waved after a scary crash on Lap 7.

Ghiotto looked to pass Aitken around the outside of the long Turn 3, but the pair touched. Ghiotto’s left rear was immediately damaged and they both flew into the outside barrier at high speed.

The cars were ruined and wedged in the barriers, but thankfully both drivers soon got out of their cars and walked away.

Huge damage was done to the barriers, and with a Formula 1 race yet to come in the day, the decision was made to end the race prematurely.

The results were counted back to the final lap completed, meaning only half points were awarded.

It may only be 7.5 points, but Zhou took his first Formula 2 victory, ahead of home hero Mazepin. Schumacher’s P3 saw him record a tenth podium of the season, with Aitken and Ghiotto fourth and fifth despite their crash.

Sixth was Tsunoda, ahead of Ilott, who scored just a single point for seventh. Ticktum added half a point to his tally for the season with P8.

So it was a weekend cut short following the red flag, but still an intriguing one as far as the championship goes.

After weeks of battling, it looks like being between Schumacher and Ilott for the title now, with the PREMA driver the clear favourite.

Schumacher sits on 191 points, 22 ahead of his fellow Ferrari junior. Tsunoda needed a good weekend and he got it, jumping up to third in the standings, boosting his chances of a 2021 Alpha Tauri drive.

Tsunoda jumps both Lundgaard and Shwartzman, who are both set to fall short of the title in their rookie seasons.

As far as the constructors’ standings are concerned, PREMA remain in control, 42.5 points clear of UNI-Virtuosi. It’s certainly not over, but the Norfolk based team will need some good results in Bahrain to catch the Italians.

Behind them, Carlin’s strong weekend sees them draw level with ART, but remain just behind in fourth due to ART having more second-placed finishes.

Time for a break then! After a hectic schedule with ten events in three months, Formula 2. Two months off now to recharge, re-focus and go again with a double header in Bahrain. Titles will be won and lost, futures will be decided and Formula 2 will provide yet more entertainment.

This week it was an easy choice for us as we witnessed a back to the future moment.

So each week we will nominate four of the name’s that stood out from all of the above action to crown our Formula 2 Driver of the week.

NEXT EVENT: ROUND 11 – Bahrain. (Click here to see the weekends schedule)