We take a picture from the past and give it some context, looking at where and when it was taken and who the people within snapshot are. If you enjoy this please do give us a share on social media.

We start our feature off by taking a trip back to 2006,Â Gianmaria Bruni took his second GP2 Series win of the year from pole position at Hockenheim despite the widely tipped and experienced Timo Glock being the favourite for his home victory.Â

The Trident Racing driver led into the first corner, in a race with some familiar names such as Lewis Hamilton, Timo Glock, Nelson Piquet Jr, Vitaly Petrov, Lucas di Grassi and Giorgio Pantano.

Hockenheim claimed its traditional first corner victims, with the first lap offering a Bruni and Piquet nose-to-tail fight, Pantano heading up Glock, and Lewis Hamilton up from his eighth starting position. 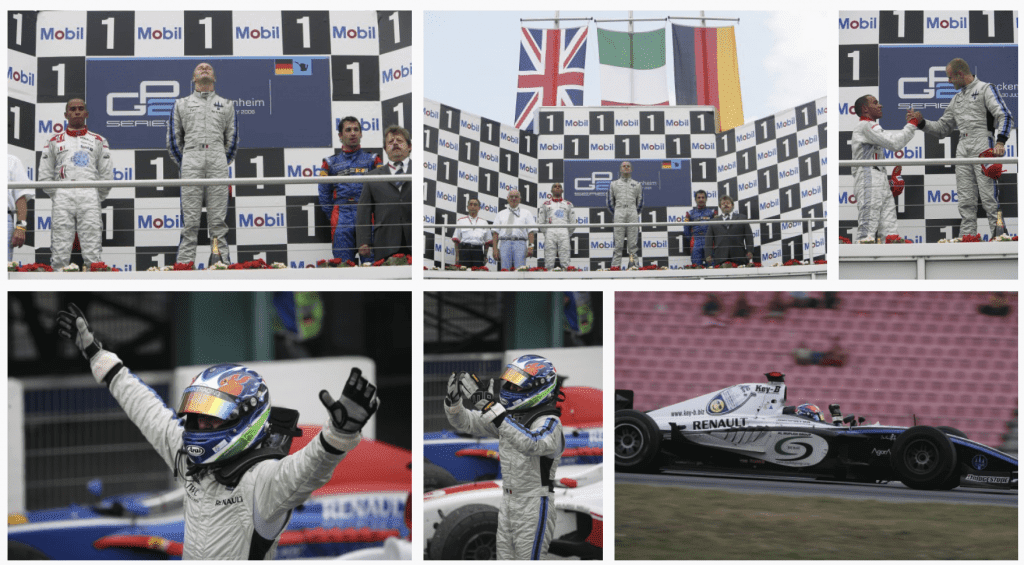 After a round of pit-stops, we had a battle between Glock, Piquet, Bruni and Hamilton starting to take some shape with the Italian Bruni and The Brit Hamilton eventually getting a gap out front.

The leaders Bruni and Hamilton continued their scrap all the way to the line. The Italian had just enough in hand despite to hold off Hamilton following a gearbox issue with ten laps to go, taking the flag to the delight of his Trident team.

Hamiltonâ€™s championship rival Piquet had been exchanging blows in the title races with Piquet gaining a seven-point haul in the previous race only to slip back as the race wore on, and thus Piquet relinquishing that exact margin as he coasted to a halt in the stadium section.

The front two had built up quite a gap in the end with the second pack of Glock, Viso, Pantano, Carroll, Lopez and Clivio Piccione claiming the final scoring spots.Â 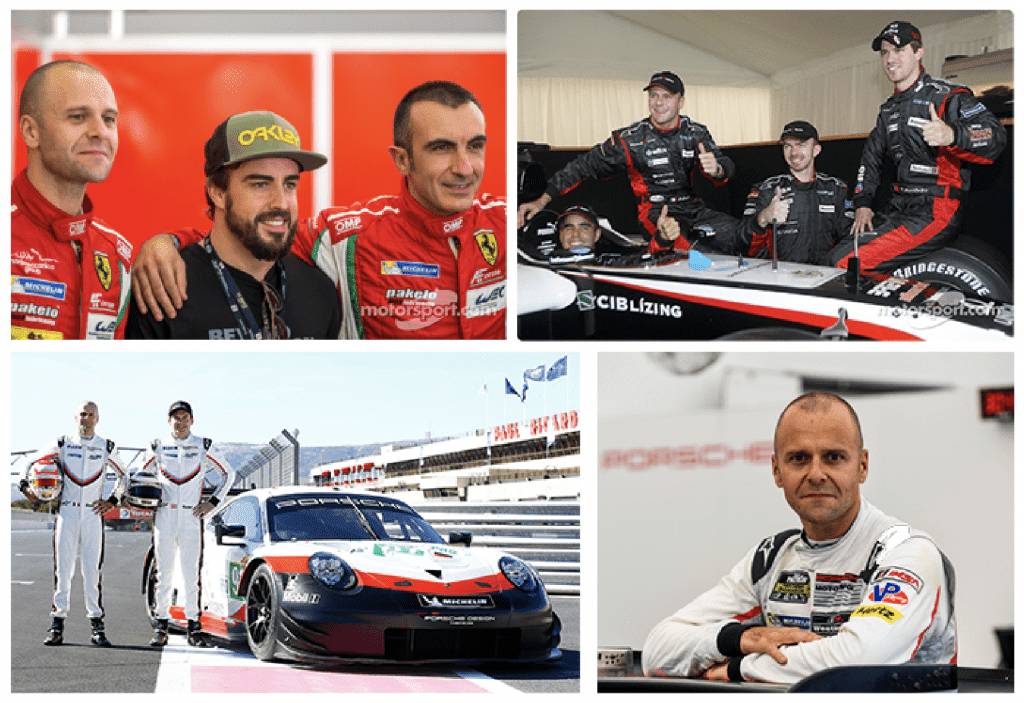 Staring out “Gimmi” Bruni claimed a victory in the 1998 Italian Formula Campus Championship in what was his second season in cars. Bruni then graduated to the 2000 British Formula 3 Championship and remained there until 2001, finishing fifth in the championship on a couple of occasions.Â

Following testing with the Minardi Formula 1 team while inÂ GP2, Bruni secured a race seat for the 2004 F1 World Championship. His first and only season in F1 saw him struggle with his Minardi as the team themselves scraped by as Grand Prix racingâ€™s perennial backmarkers.Â

He returned to GP2 in 2005 and as pictured in 2006 was racing for Trident, he finished the season seventh in the driversâ€™ championship claiming two victories in this Hockenheim race and his home race in Imola, Italy.Â

However, his season overall was plagued with ten retirements which amounted to almost half of the campaign.Â

With little prospect of Chasing the dream to F1, Bruni switched to endurance racing and a Ferrari 430 GT2 for 2007â€™s FIA GT, Le Mans Series and ALMS championships.Â

Bruni would go on to have a successful career and finally having some solid metal to work with he was a contender for the class win, Bruni and co-driver Toni Vilander won the 2008 FIA GT2 title.

He started the 2010 Spa 24 Hours from pole position before sharing a Ferrari F458 with F1 veteran Giancarlo Fisichella in the GTE Pro class of the 2011 Le Mans Series. They won twice to clinch the title and Bruni followed that success with the 2012 International GT Open Championship for the team. He has won his class at Le Mans on three occasions â€“ 2008, 2012 and 2014.

Having spent ten years racing for GT Ferraris, Bruni defected to Porsche for the 2017 IMSA sports car series from July’s race at Watkins Glen. He finished second in GTE-Pro in the 2018 Le Mans 24 Hours and Shanghai 6 Hours before winning the class at the following year’s Sebring 1000 miles.Â 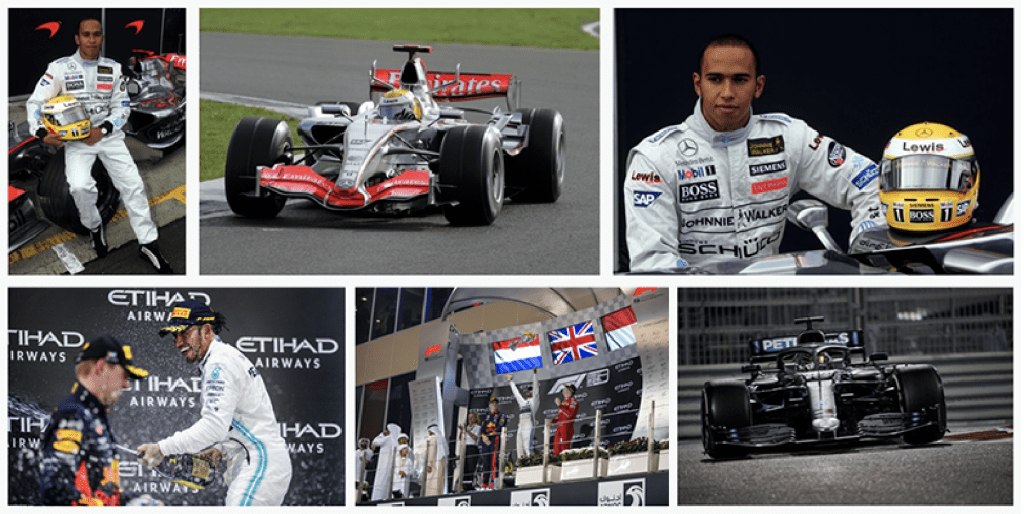 Needless to say, most reading this will know a considerable amount about the six-time Formula One World Champion. Considered one of the best-prepared rookies in F1 history, following an introduction to Ron Dennis at the 1995 Autosport Awards. McLaren took an interest in his fledgeling career from that moment and the youngster responded with a string of karting titles.Â

Hamilton made a much-hyped switch to cars at the end of 2001 when driving for Manor Motorsport and then in 2003 started to show his pace following a slow start to the season but then recovering to win ten times in eleven races and complete a dominant title win.

That same season he also made his Formula 3 debut and there begun what would become a continued friendship and rivalry with Nico Rosberg.Â

He started the Macau GP from pole position only to lose a chance of victory when distracted by Rosbergâ€™s second lap accident. He then came from 21st on the grid for Bahrainâ€™s qualification race to beat Rosberg in the final. Rosberg was slightly more advanced in his career at the time and made his step into GP2 a year ahead of Hamilton but they would both become rookie GP2 Champions in their respective years before meeting again in Formula One in later years.

Having spent his single-seater career so far with Manor, Hamilton moved to then champions ART Grand Prix for the second season in the F3 Euroseries. The pre-season favourite dominated with his Dallara F305-Mercedes-Benz winning 15 of the 20 rounds against a field that included team-mate Adrian Sutil, Paul di Resta and a fresh-faced Sebastian Vettel.

Now ready himself to make the step up into GP2 in 2006 he replaced Rosberg in the Art Grand Prix seat. This season would prove pivotal in convincing McLaren that here was a special talent that already warranted a top F1 drive. As mentioned in the aforementioned Hockenheim race, Hamilton was showing his skill and pace in the series and would end the season as a Rookie Champion winning five times as he beat championship favourite Nelson Piquet Jr to the title at the first attempt.

Any thoughts that Hamilton would make a quiet F1 bow and play a supporting role to a new team-mate and two-time World Champion Fernando Alonso were dismissed at the first Grand Prix of 2007. The season would take Hamilton to within and single point of Champion Kimi Raikkonen and level with teammate Fernando Alonso in what has become a legendary season for many reasons but one that is often forgotten is that this may well be considered the best rookie season of all time as he so nearly delivered an unprecedented triple series championship run in F3, F2 and F1.Â

He would go on to win the 2008 World Drivers Championship at the age of 23 and later join Mercedes-Benz AMG when he would partner a familiar face in Nico Rosberg following Michael Schumacherâ€™s second retirement.Â

The rivalry with Nico Rosberg would excite fans as the classic pairing battled alone for titles in their dominant Silver Arrows machinery. Aside from the 2016 title won by Rosberg, Lewis has dominated the sport and is now on the verge of becoming not only the most decorated driver but what many may argue as the greatest driver in history.

Timo Glock got into racing at a fairly late age of 15 years old when he used money given to him as a gift to buy a kart and start racing (Read our karting article: The Entry Point). Championship success three years later proved that a wise investment.

His car racing debut was in the 2000 Formula BMW and winner of the Junior Cup that year, Glock was crowned German Formula BMW Champion in 2001. He graduated to German Formula 3 and won three times to clinch third in the championship.Â

Rather than continue in the junior categories, Glock was made an offer he couldnâ€™t refuse and signed as reserve driver for Jordan Grand Prix in 2004. He impressed when testing the Jordan and replaced regular race driver Giorgio Pantano for a number of races.

Without an F1 opportunity for 2005, he drove in other championships but F1 remained his focus and Glock took the decision to race in the GP2 Series from 2006. A mid-season team switch from BCN CompeticiÃ³n to iSport International was rewarded with race wins and fourth in the standings as he went wheel-to-wheel with champion Lewis Hamilton. The German remained with the team for 2007 and withstood a late challenge from Lucas di Grassi to clinch the title at the final round.

In 2008 Glock returned to Formula OneÂ racing with Toyota to have a solid season with the team but will always be best remembered for being a central figure in the most dramatic championship showdown to date as Hamilton passed him on the final corner in the wet at Interlagos, Brazil to take the required fifth place and title.Â

In both 2008 and 2009 Glock finished 10th in the championship, however, following the global financial crisis as many others, Toyota withdrew from F1 at the end of 2009. Glock then needing a race seat joined newcomers Virgin Racing and then renamed Marussia until 2012 but was predominantly a back-marker given the teams resource in the pitlane.Â

Tired of making up the numbers at the back of the field, Glock joined BMW in 2013 for the DTM Series. He would then go on to have a solid career in DTM and winning many races and at what appeared to be his favourite track in Hockenheim in particular.Â

He would claim some notable pole positions and race victories, however, that never really resulted in any championship bids finishing a best-placed 5th in 2018 over those years. Glock continues to be a works driver for BMW Motorsport.Â

At insideF2.com we totally dedicated to coverage and content for the FIA Formula 2 Wolrd Championship for the Teams and their Drivers. Follow us @F2inside (Twitter) About James: Personally passionate about sports but has a love for fast cars driving round in circles!
All Posts