Arthur Leclerc dominated the first Formula 2 Virtual GP winning both the Feature and the Sprint race around the Sakhir circuit, in Bahrain.

This has been the first Virtual GP completely dedicated to the junior formulas which accompany Formula 1 around the world.

The field was packed with drivers from Formula 2, Formula 3, and other feeder series. The BWT HWA Racelab team decided to field only one car, the #18, in order to honour the memory of the late Anthoine Hubert (who in the game can be selected as the #19 car for the 2019 Formula 2 season).

The order for the 16-lap feature race was decided by a one-shot qualifying format, which saw Arthur Leclerc take the pole position, followed by Liam Lawson in P2, and Oliver Rowland in P3.

Leclerc had a good start, and managed to avoid the Turn 1 midfield chaos. After that, he settled on a short battle with Rowland in P2, until the pit stops on Lap 6.

After that, Rowland faded away on the Medium tyres, allowing Leclerc to run away with the victory unopposed.

In the midfield, Felipe Drugovich put on a good show to achieve P8 and pole position for the sprint race. The race was characterized by the big amount of time penalties to various drivers, because of the strict corner cutting rules enforced for the race. 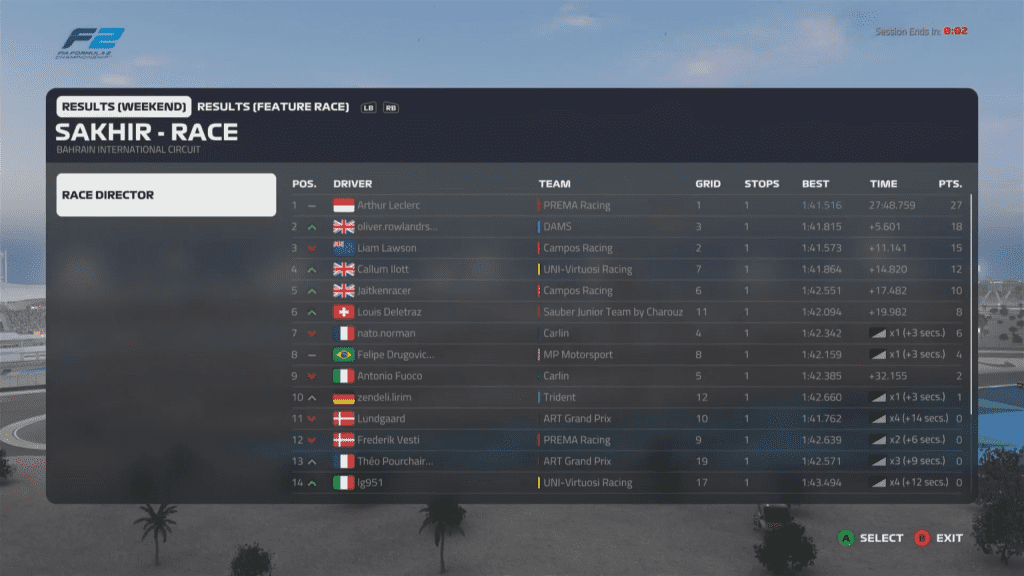 Despite starting from pole for the 5-lap sprint race, Drugovich had a poor start and a scrappy first lap, sending him down the order.

Norman Nato led the entire race, but was eventually demoted to P3 in favour of Arthur Leclerc (P1) and Louis Deletraz (P2), after taking a 2-second time penalty for not respecting the track limits.

Leclerc and Deletraz had a good battle for a couple of laps, with the Monegasque eventually forcing his way through after a rare mistake, going wide in the final corner.

Consistency and training paid off for Arthur Leclerc who absolutely dominated the Formula 2 Virtual GP on a circuit that saw his elder brother Charles take an incredible win during the 2017 Formula 2 season.

The Formula 2 Virtual GP series will be back with more rounds in Spain, Monaco and Azerbaijan.

Watch the race again here on the official F1 YouTubeÂ

_
Let us know your thoughts @F2inside on Twitter by sharing this post. If you saw something we missed we will give you a shout out next week in the post.
Ensure you check our other pages here on insideF2.com and follow us on Twitter to see all of our very own latest posts.

Alessio Romito is a motorsport enthusiast with a passion for writing. A life-long Ferrari fan, he knows that this year will finally be the year when we win the F1 championship. As an InsideF2 contributor, a passion for the junior championships see him contribute to both race and driver analysis.
All Posts