We take a picture from the past and give it some context and If you enjoy these please do share on social media and let us know your thoughts. 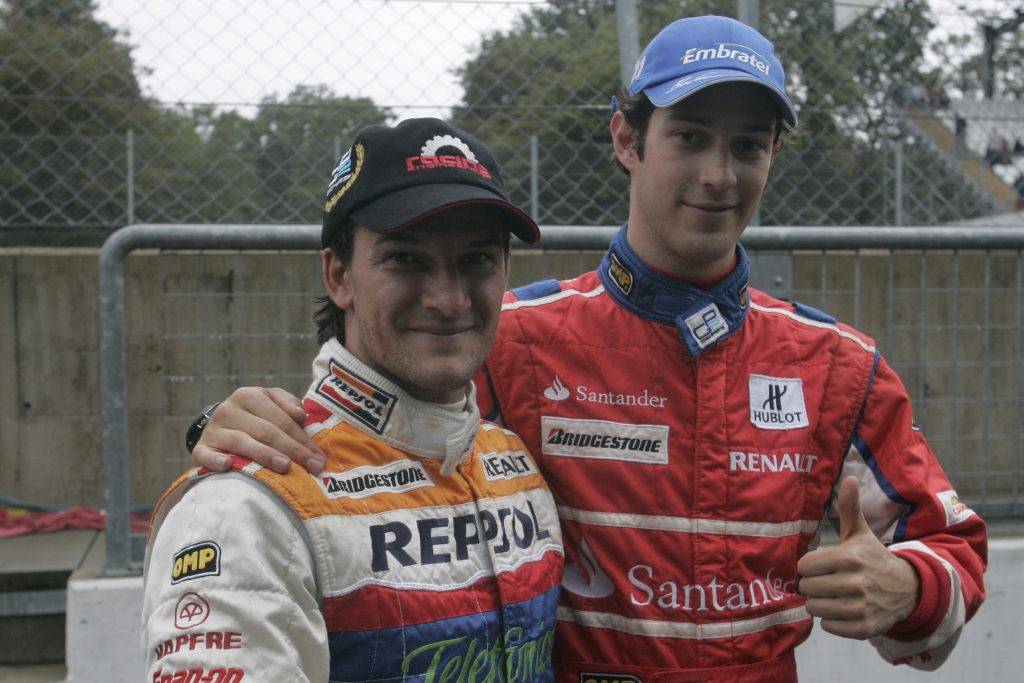 The calm before the storm, two men chasing glory and to put themselves in the shop window for a drive in next yearâ€™s Formula 1 grid.

The 2008 GP2 championship saw a battle between youth and experience, in a championship which went down to the wire at Monza with both men taking five wins that season.

Coming into the 2008 season, both Giorgio Pantano and Bruno Senna knew that this would be their last chance of getting to the big time of Formula One.

For Pantano, a championship win would be a chance at redemption after his reputation was heavily damaged after a horrendous 2004 season with Jordan which saw the Italian stop with three races to go due to the financial burden placed on him and his family, with Pantano deciding to fall back into GP2 for 2005 to try and salvage something of his once-promising career.

But GP2 didnâ€™t see immediate success for the Italian who was once dubbed invincible by Fernando Alonso as in 2005 he failed to grab a race win and was outpaced by his rookie teammate Adam Carroll who beat him in the driverâ€™s standings with the Northern Irishman fourth whilst Pantano was a lowly sixth.

During the 2005 season, Pantano had been testing the Indycar waters driving for the esteemed Chip Ganassi racing replacing Darren Manning, but despite getting a fourth place at Watkins Glen, Pantano was not given a drive.

2006 saw Pantano sit out of the first half of the season after a Champ Car drive failed to materialise, before receiving a call up from Giancarlo Fisichellaâ€™s FMS international team to replace countrymen Luca Filippi.

Things started off poorly for Pantano as he failed to score points for the first three races, but Pantano quickly found his stride and he took his first victory in three years at Magny Cours with the Italian ending his half-season on a high with a double at Monza which saw him finish fifth in the driverâ€™s championship.

2007 saw Pantano move to Racing Engineering for the full season but he was unable to challenge Timo Glock or Lucas Di Grassi for the championship as Pantano finished twenty-nine points behind Glock with two wins.

As for Senna, a GP2 title would have been a fairytale result in what had been a far from easy career path for the Brazilian.

His uncle the late Ayrton Senna had praised his nephew very highly in 1993. â€œIf you think I’m fast, just wait until you see my nephew Bruno”.

Within months of that message being recorded Ayrton was killed at the 1994 San Marino Grand Prix at Imola, and with-it Brunoâ€™s racing career came to a halt.

Further tragedy struck two years later when Brunoâ€™s father was killed in a motorbike accident, but Bruno still had a burning ambition for motorsport which included him sneaking down the stairs in the middle of the night to watch Grand Prixâ€™s.

Sennaâ€™s return to racing started off slowly with a six-race spell in Formula BMW UK which saw him score six points, however, the Brazilianâ€™s moved up to British Formula 3 for 2005 with Senna finishing tenth in the driverâ€™s standings.

The Brazilian improved even further in 2006 with five race wins and third in the driverâ€™s championship with Senna graduating to GP2 for 2007 with Arden.

2007 was a baptism of fire for Senna as he adapted to life in GP2 which saw him take a maiden win at Catalunya, however a combination of poor qualifying, bad luck saw Senna score only two more podiums that season which saw him finish an average eighth in the driversâ€™ standings.

2008 saw Senna move to the defending champions Isport but it was Pantano who scored first with a win in Turkey, whilst Senna scored nothing in a horrendous weekend which saw him suffer a gruesome accident after hitting a stray dog.

The pair traded wins up until the Hungaroring where neither driver bagged a win, giving Pantano a slim championship lead coming into the final two rounds of the season.

But Pantano had a nightmare weekend at Spa which saw him excluded from the sprint race and disqualified from the feature race giving title rival Senna a chance to capitalise which the Brazilian didnâ€™t as he too failed to score at Spa.

Pantano came into Monza knowing that it was win or bust if he wanted any hope of a seat on the F1 grid whilst Senna had nothing to lose and all to gain as a title win would have put him in with a chance with Toro Rosso or Honda for 2009, but in order to overhaul Pantano, he would need to win both races and hope that his Italian rival wouldnâ€™t add to his eleven-point deficit over Senna.

In the rain of the feature race, which saw a heavy first lap accident for Andreas Zuber after Pantanoâ€™s teammate Javier Villa missed his breaking point, the Italian lead before making a bizarre error after crossing the white line when leaving the pit lane causing him to receive a drive-through penalty dropping him out of the points.

Luckily Pantano hung on to take the title with a race to spare as Senna failed to get further up the points giving the Italian the GP2 title at the fourth time of asking.

However neither driver would get onto the 2009 Formula 1 grid, with Senna losing out on a Brawn seat to Rubens Barrichello who would have a run at the 2009 title, whilst Pantano headed to the short-lived Superleague Formula championship driving the AC Milan car before bouncing around being a substitute in Indy car racing and driving GT cars.