Itâ€™s all smiles for French pair Romain Grosjean and Eric Boullier here in Belgium as Grosjean celebrates winning the 2011 GP2 title, his ticket for a return to Formula 1. 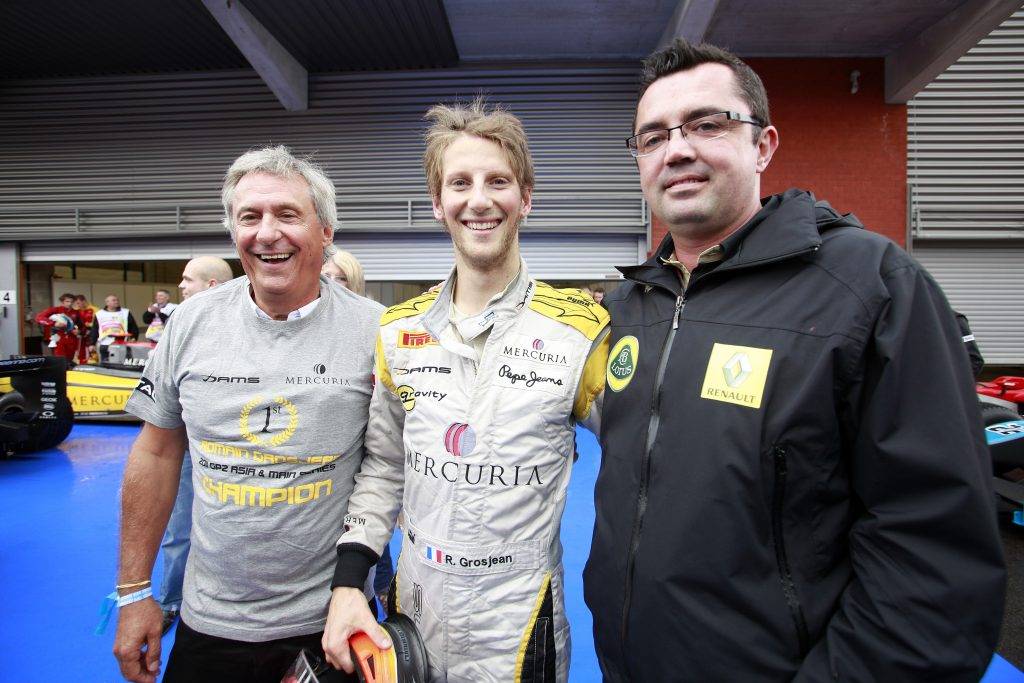 Grosjean dominated the season, adding the GP2 title to the GP2 Asia championship he won earlier in the year.

He took five wins during the season as he wiped the floor with a field that contained eight other future F1 drivers.

Having endured seven tough races in F1 with Renault in 2009, Grosjean would be returning to the sport with the same team, albeit now under the name Lotus â€“ and Boullier would be his team boss.

In December that year Grosjeanâ€™s return to F1 was confirmed, with the returning Kimi Raikkonen signed alongside him, a great coup for Boullier and Lotus.

Under Boullierâ€™s guidance, the car was fast from the start. Grosjean scored his first points in F1 with P6 in China and then he secured his first F1 podium at the very next race in Bahrain with third place.

It was double success for Lotus in the desert as Raikkonen came home second, undoubtedly pleasing Boullier.

Podiums in Canada and Hungary followed for Grosjean but a more worrying trend was growing. Grosjeanâ€™s F1 career will perhaps be most remembered for the crash he caused at the start of 2012â€™s Belgian Grand Prix, the latest in a series of first lap incidents.

He cut across Lewis Hamilton on the run into La Source and the pair touched, catapulting Grosjeanâ€™s Lotus over Fernando Alonsoâ€™s Ferrari, narrowly missing the Spaniardâ€™s head.

This latest crash resulted in a one-race ban and left Boullier scratching his head as to how he could get the most out of his very talented, but error-prone driver.

He returned after the Italian Grand Prix but didnâ€™t trouble the podium again, ending his first full season in F1 in eighth place after an inconsistent season.

Despite the crashes, Lotus retained Grosjean for 2013, once again partnering Raikkonen.

The Finn won the first race of the season in Australia before the pair repeated their 2012 result in Bahrain with another double podium.

Grosjean failed to score in the next four races but bounced back with third in Germany, a race he had a chance of victory in.

As Red Bullâ€™s Sebastian Vettel charged to the title, Grosjean really found form at the end of the season. He finished third in Korea before leading half of the race in Japan. Ultimately he was caught and passed by Vettel and Mark Webber but Grosjean was really starting to impress.

Third again in India confirmed it was no fluke and as Raikkonen sat out the last two races with injury, Grosjean scored a superb second place in Austin.

This excellent end of the season could have been the catalyst for bigger and better things for Grosjean, Lotus and Boullier.

However, Boullier moved to McLaren in January 2014 and since then, neither Boullier or Grosjean have had the same success.

The team didnâ€™t trouble the podium again that year but it was even worse for Grosjean at Lotus.

Grosjean stood on the podium six times in 2013 but he could only score eight points with a pair of P8s in Spain and Monaco as the team struggled on the track with pace and off the track financially.

McLaren and Boullier were looking to bounce back from a tough year in 2014 with the return of Honda engines and the high profile signing of Alonso but it was a disaster.

The Honda engine was underpowered and McLarenâ€™s two world champions could only finish ahead of Sauberâ€™s Marcus Ericsson and the three Manor drivers in the final standings, with just 27 points between them.

Lotus were also struggling, but Grosjean was a regular points scorer and even managed to grab third at the Belgian Grand Prix, a result that reportedly kept the team alive.

Lotus became Renault before 2016 and Grosjean opted to join new outfit Haas. Grosjean often found himself battling Boullierâ€™s McLarens during the season as he gave Haas a great debut with sixth in Australia.

He repeated the dose with P5 in Bahrain but as upgrades came, Haasâ€™ pace faded and he only managed three more points finishes.

Led by Alonso, McLaren performed better than 2015, recovering to sixth in the constructorsâ€™ standings but the pressure remained on Boullier to deliver results.

After the mini-recovery of 2016, 2017 was terrible for McLaren and Boullier. Alonso and rookie Stoffel Vandoorne dragged an awful car to 30 points, ahead of only Sauber.

F1 careers coming to an end?

Both men had horrendous starts to their 2018 campaigns with Grosjean failing to score in the first eight races, including a nasty crash at the Spanish Grand Prix. Lots of criticism came his way following the incident, but Boullier was facing much tougher problems.

Although Alonso scored points in the first five races, Boullierâ€™s position was under pressure and he resigned from his post in July, with McLaren undergoing some serious reconstruction at the top.

As Boullier left McLaren, Grosjeanâ€™s form improved. He broke his pointless streak with a seriously impressive fourth place in Austria, and his 37 points helped Haas finish a best ever fifth in the constructorsâ€™ standings.

Grosjean was retained by Haas alongside Magnussen once again in 2019 with new sponsors Rich Energy on board. It was supposed to be another step in the right direction for Haas but the new black and gold car was well off the pace.

Thatâ€™s without mentioning the Rich Energy fiasco, with the sponsorship deal terminated mid-season. Grosjean only managed eight points in 2019 and plenty called for him to be dropped by Haas in favour of Nico Hulkenberg,

However, Grosjean was hired again for 2020 and will be looking to hit the reset button when F1 gets back underway next month. At 34, Grosjean is one of the most experienced men on the F1 grid and he will be hoping for one final flourish to end, or extend, his F1 career.

As for Boullier, he joined the French Grand Prix organisers in 2019 and was named managing director of the project earlier this year.

Sadly for him it looks like there wonâ€™t be a race at Paul Ricard this year, meaning Grosjean wonâ€™t get a chance to race in front of his home crowd.

Whatever happens to these two men in their Formula 1 futures, itâ€™s good to remember them by the success they had.

Theyâ€™ve both come a long way since that Belgian GP2 round at Spa, and theyâ€™ve both enjoyed fruitful F1 careers, despite recent struggles.

Let us know in the comments or tag us in a tweet @F2inside by sharing this post.