We can take a look back at Formula 2’s 2017 Champion, current Ferrari F1 driver Charles Leclerc.

2017 saw the 51st running of the official Formula 1 feeder series that was renamed tand branded The FIA Formula 2 Championship for that year.

It was also the year of Charles Leclerc, who was only 19 when the season started and is now racing in F1 for Ferrari.

The Monegasque driver entered the series in 2017 as the reigning GP3 champion and showed dominance from his first-round at that level.

Leclerc marked himself as a future star by winning the series in his first attempt, something not many drivers before him had managed to do.

The Ferrari Academy driver impressed in his first weekend, taking pole for the Feature Race in Bahrain. He then took victory in the Sprint Race at the same circuit thanks to his team, PREMA, and an unusual pitstop strategy.

Leclerc went on to dominate with a further seven poles and six more victories to finish 72 points ahead of the highly experienced Artem Markelov.

Even with all the glory on track, 2017 was a year that saw Charles Leclerc lose his father just days before the Baku round of the season.

Despite this, he still took pole position and the victory in the Feature Race showing the passion, strength and skill that would mark him as a future star. 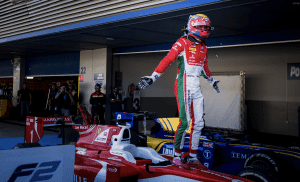 Leclerc even looked set to win both races and crossed the line first in the Sprint Race. But a 10 second time penalty, for failing to slow for yellow flags, meant he dropped back to second on a tough weekend for the Monegasque.

There were problems on track for Leclerc in 2017 with a couple of disqualifications. One in a qualifying session in Hungary after getting pole and the other in a Feature Race in Belgium after he won. Both times he came from the back to the points in a great fight through the field.

Leclerc won the Feature Race at the stand-alone event in Jerez to seal the championship with a round to go. While Leclerc celebrated both the win and title on the podium, there was some confusion as the wrong national anthem played over the speakers.

“But apart from that, I think we have always been on top, and this feels really great. Obviously, I’ve had some lows during the season, a few on the racing side but most of all on the personal side obviously, after losing my father. 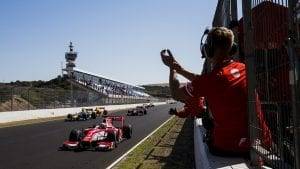 Winning the championship is an amazing way for me to honour him, and actually, I would like to dedicate this title for him. I would prefer to not dedicate any other titles in the future.

“Last year I dedicated to Jules [Bianchi], this year to my father, so hopefully next year I don’t, well, next year maybe it might be a bit more difficult [to win a title], but hopefully I don’t need to dedicate any other titles.

“It’s always amazing to win any championship. I think it’s the result of a lot of dedication from all the teams and all the guys that are working here. Obviously, the mechanics, the engineers, the team managers, and everyone around I mean it’s a result of this. I’m very, very happy with them, they couldn’t have done any better job this year – they have given me the best car out there, as I said there have been quite a few lows but to be honest, I think that when you want to be the best with the car you need to be on the limit with everything and I completely understood that, so I think they couldn’t do any better and I can’t thank them enough this year.”

Even after clinching the title, Leclerc put in his all and in the final two races in Abu Dhabi claimed a second place and a victory. This cemented Ferrari’s decision to put Leclerc straight into Formula 1 with a drive at Sauber.

Charles Leclerc is currently racing for Ferrari in Formula 1 after a year at Sauber and has taken seven pole positions and two wins so far for the Scuderia.  The most recent victory was in Monza in 2019, in front of the Tifosi.