The 2020 Formula 2 Tuscany race weekend is upon us and Jack Aitken came ready!

The Italian double-header concludes at the Mugello circuit.

It’s the first time Formula 2 has visited the track in the modern era. However, some drivers have already raced here in a previous series, including Aitken.

“Mugello isn’t completely new to me as I raced there a few years ago in Formula Renault. My main memory of it is crashing at Arrabbiata – so at least I’ve already found where the limit is there already! It’s a fun track actually, nice to drive.”

“I’m really looking forward to getting on track at Mugello today: it’s a quick circuit with lots of medium to high speed corners, so it’s going to be a challenging one, with hot weather – and tough on tyres in particular. The Arrabbiata Corners in particular are really quick, and for most people it’s going to be a new experience. But I’ve always adapted well to new circuits, so I think it’s going to suit me.”

With just 10 minutes left of the session, Aitken left the track and crashed out after locking up his front left in the final corner of the track.

Sliding through the gravel trap meant he was just a passenger as his car slid into the wall.

Using half instinct and half skill, Aitken tactfully wrestled with the steering wheel as it bounced through the gravel towards the wall, in an attempt to minimise the damage to the car with a side impact.

With Aitken thankfully unhurt, the Virtual Safety Car was called upon while his Campos car was extricated.

Jack Aitken found the limit of Mugello the hard way on Friday morning – but you can bet he'll be giving it everything in qualifying ?#TuscanGP ?? #F1 pic.twitter.com/1Cg5oPh6iD 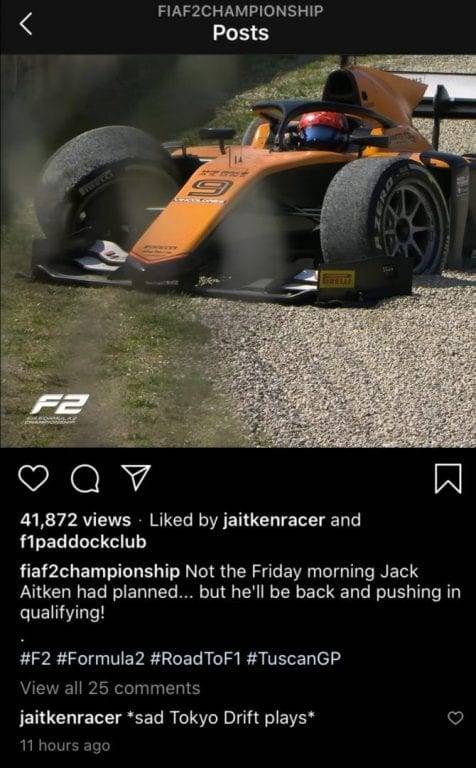 He's okay, but his car is going to need some love ahead of qualifying ?#TuscanGP ?? #F2 pic.twitter.com/69QeX4q0hF

The Campos team certainly did give Aitken’s car some love, pulling out all the stops:

When we uncovered more damage than first realised after my crash with less than an hour before Quali, the @CamposRacing guys put in a SHIFT ?? Muchas gracias guys! Shame we were only a few tenths from the top 3 in P10… Plenty to fight for tomorrow ? #YOTUS pic.twitter.com/XEYuPBoSBb

With the car ready for the Qualifying session, an unaffected Aitken focussed on the task ahead.

He pulled a P10 out of the bag, just a few tenths from a place in the top three.

“With new venues like this, you’ve only got a short practice and then you’re straight into qualifying: so it’s always going to suit the people who can get to grips with everything as quickly as possible and translate that into a quick qualifying lap despite not having had much information before. Luckily I think I’m quite good at that, so this is what I’ll be focussing on throughout the weekend.”